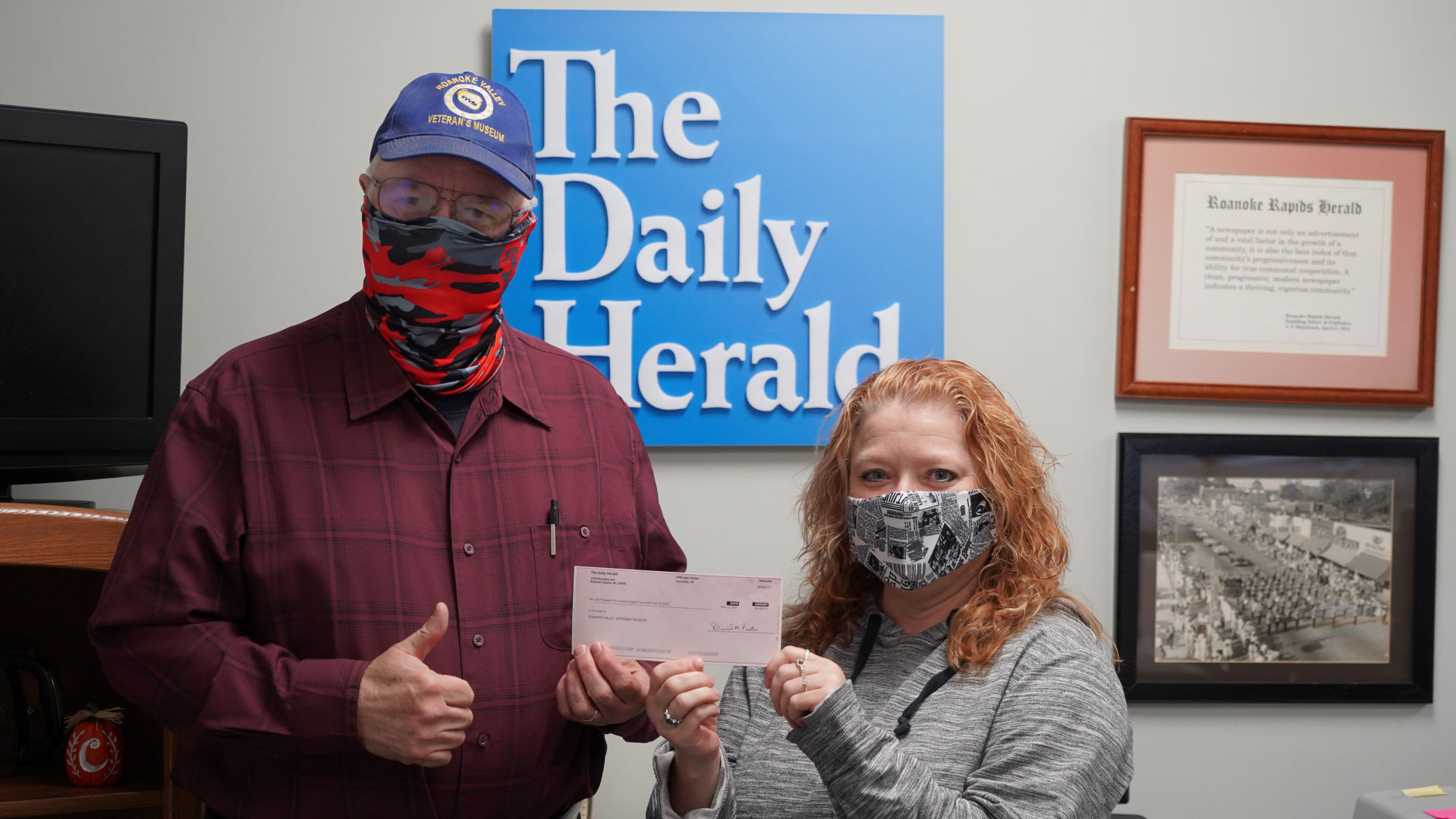 The Roanoke Valley Veteran’s Museum is moving to Littleton with help from the community.

The long battle to stay inside its 12-year residency at Becker Village Mall came to an end as the museum curators sought to move the nonprofit organization in an effort to save the Valley’s military heritage.

The Daily Herald selects a recipient in need of emergency funds for its Herald Angel each year. The purpose is to raise funds through a series of articles to bring awareness to any situation that needs immediate help.

The museum faced such circumstances as the group struggled a gradual degradation of the mall over the years with mold, mildew and foot traffic decline. With few businesses left, empty stores and the smell of cigarette smoke, the mall was sold for $1.5M in July of 2019.

Then the COVID-19 pandemic hit in early 2020, crippling the museum’s operations as rent continued and the number of volunteers dwindled. Volunteers are essential for the function of the facility, as well as the donations it receives.

The Roanoke Valley Veteran’s Museum began as an idea by Founder Dallas Jones, a Navy veteran who survived Pearl Harbor, to create a center that housed military veterans’ history. The museum took in military memorabilia that was donated or loaned, as well as more than 1,700 portraits of veterans from generations of service from the Valley and beyond.

An article in The Daily Herald on Jan. 7, 2014, told of a ceremony held for Jones at the museum inside the mall. The article mentioned Paul Heaton, whose family owned Becker Village Mall and allowed the museum to operate rent-free, who said the facility was a great asset to the community.

“The museum will be the most permanent and lasting memory many in the Roanoke Valley will have of Dallas Jones,” Heaton said in the article. “I hope it will survive many decades to come to keep Dallas in our hearts, our thoughts and our prayers.”

Now in 2021, the Roanoke Valley Veteran’s Museum’s new home will be at 102 E. North Main St. in Littleton, where the legacy of the Valley’s military heritage will continue, said the museum’s Board of Directors Chairman David Johnson.

“It’s absolutely amazing,” Johnson said with pride. “Through the paper’s efforts, we were offered not one, not two, but a total of three buildings in which to relocate. Now, because of that, the Roanoke Valley Veteran’s Museum can stay in the Roanoke Valley.”

Through a series of Herald Angel articles, the cause to help the museum garnered financial support of $1,485.25, raised through The Daily Herald and community interest in finding a new home for the organization.

Johnson said he wanted to compliment the citizens who stepped up financially and offered buildings in support.

“I mean, who does that?” Johnson said. “Isn’t it awesome to live here and to get three buildings offered to you?”

The museum’s new location was offered by Ed and Deb Fitts, owners of the Ed Fitts Charitable Foundation, who are working with the museum curators to refurbish and make it a suitable location, Johnson said.

The Fitts delivered a statement about the announcement on Thursday about the museum’s move.

“We are delighted to have the Roanoke Valley Veteran’s Museum relocating to Littleton,” according to the statement. “Our goal is to highlight this destination for all visitors to learn more about the history of the brave men and women from the Roanoke Valley who served their country in such an honorable way.”

“I’ll tell you from my perspective, it makes a big difference when you can bring a free building to the negotiating table and offer it to a nonprofit foundation,” he said. “You’re not just coming hand in hand, you’re bringing a building with you.”

Another interest for the museum’s next location came from Weldon, where Co-Owner Bruce Tyler of the Weldon Mills Distillery offered half of a building for the museum for free, Johnson said.

“That may be a future satellite location, but oh my gosh, what a patriotic community-minded organization — we love the distillery,” he said.

Johnson said Lowe’s in Henderson had pitched in with supplying the museum with boxes for moving, the Tractor Supply Company website for giving a discount for a nonprofit museum for a gun safe, and the Food Lion in Lake Gaston for providing a forklift to move the 800-pound safe. Now the focus for the museum’s move is to find volunteers to help man the museum, he said.

Dick Kohl, a Marine veteran and member of American Legion Post 308 in Littleton, said he would be remiss if he did not emphasize the veteran’s museum’s importance to the Roanoke Valley.

“The Roanoke Valley Veteran’s Museum is more than just a building, it represents the lives of generations of people who served who are now being recognized and remembered,” Kohl said. “We have grandfathers, we have fathers, we have sons that have been recognized and remembered, and I think it’s important that we keep that tradition. I think also that the veteran’s museum does a service to the community by recognizing veterans from month to month when we don’t have the pandemic going on.”

He continued to say the patriot is the one who answers the call to their country, then comes home, builds a life and family, contributes to the community and continues to serve in any capacity they can.

“The veteran’s museum recognizes that and looks out for those kinds of folks,” Kohl said. “There’s memorabilia that’s been provided there. There’s pictures of veterans and things that are important and they should be preserved and we should have a place where people can come and look. I think that Littleton is a good location for the museum and can hardly wait until we get it open and we can have people start coming through and visiting the museum again.”

The museum in Roanoke Rapids was a place for school field trips to learn about military history and provide an educational experience. But the number of school children visiting the museum dwindled over time.

Johnson said the museum is looking forward to seeing school buses parking outside of the new location and students coming inside to tour the museum and conduct scavenger hunts.

With that, Johnson said they are looking forward to having a grand opening for the museum’s new location this summer.

He also wanted to thank The Daily Herald for designating the museum for the Herald Angel, the donation and series of stories to keep the community advised on the progress and explaining the situation.

“Thanks again to The Daily Herald for their support,” Johnson said. “This specific event in and of itself proves and demonstrates the value of local news. We couldn’t try to get that on some of the big boy stuff, but oh my gosh, it’s the paper taking care of the Valley and thanks to you [this reporter] personally for doing that.”

“I am so happy and thankful selecting the Roanoke Valley Veteran’s Museum as the Herald Angel this year paid off,” Bedwell said. “The late Dallas Jones was a wonderful veteran and a very caring person. I think his creation, the museum, should live on. All veterans need to be remembered and supported for the sacrifices they made for our country. What better way than to show patriotism than to help the veteran’s museum in any way possible.”

To contribute funds to help the Roanoke Valley Veteran’s Museum, visit their GoFundMe page at bit.ly/3pzF96r. For more information on volunteering with the museum call Johnson at 252-586-4469.