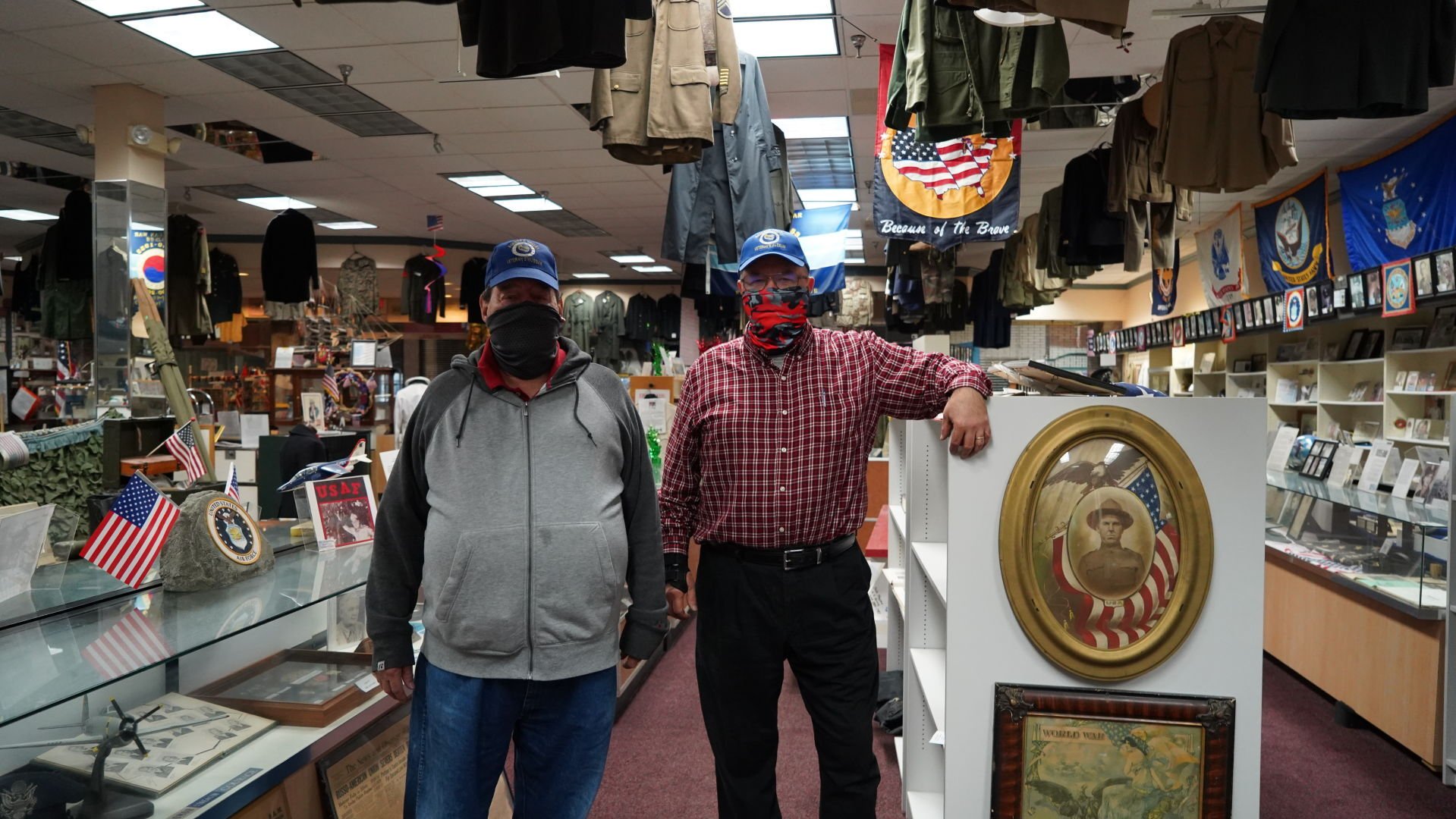 The Roanoke Valley Veteran’s Museum reached out to the public for help, and help is on the way.

The Daily Herald has selected the veteran’s museum as this year’s Herald Angel, which is its annual fundraiser for individuals or organizations in need during financial emergencies.

The museum’s dire situation inside the Becker Village Mall was the subject of a a previous article in The Daily Herald. The organization has felt the impact of the COVID-19 pandemic, mold and ceaseless rent, where the museum’s life supply comes from donations and volunteers. Read the article at bit.ly/3lTMb52.

With the word out, Chairman David Johnson of the museum’s board of directors, said the Roanoke Valley is answering the call. Johnson said there are people in the community who have reached out to the museum to offer help.

“Isn’t that absolutely awesome to be able to live in an area where people have a deep patriotic inclination?” he said on Saturday. “You can put through the newspaper — an article in the paper saying, ‘I’d like to have a building. Anybody have an extra building they can give me?’ And to have the community respond and you have multiple offers that we’re evaluating right now to see how feasible what the timeline those kinds of things.”

Some options offered are buildings, but most would require a substantial amount of funds to restore that could take nearly a year, Johnson said.

“Very few buildings are brand new that are being offered,” he said. “Most of them need some level of renovation. We’re looking at our timeline because our rainy-day funds are rapidly running out in the museum here. Regardless of where we move, we’re going to need some financial resources to effect that move and to prepare the new facility.”

Johnson said the rainy-day funds are expected to run dry come spring and money is needed on reserve, for trucks, boxes and possibly storage at the museum’s new location.

“We’re looking at a spring burn rate that we’d have to move absolutely somewhere at that time frame,” he said.

The Roanoke Valley Veteran’s Museum has been at the location in the mall for 12 years and holds memorabilia that tells the stories of the Roanoke Valley veterans from all eras. Most items were donated, but some were loaned to the museum as well.

However, one aspect of the museum that stands out is the display of portraits around the museum of veterans from the Roanoke Valley.

President of the museum Frederick P. Johnston, who served 20 years in the Navy, said the original idea behind the museum was to honor the veterans by hanging portraits in the facility. Now, the museum holds more than 1,700 portraits of veterans, Johnston said.

“There’s nothing that warms my heart more than when a 5, 6, 7 year old comes in and says, ‘I want to go see grandpa,’ ” he said. “And so we take them over and show them their grandpa’s picture, and they just marvel at that.”

Traveling from Florida to the area where he once lived was Charles Ellis, who said he served in the U.S. Air Force for several years. He visits the museum whenever he gets a chance. One of the reasons Ellis visits is to see the portraits of his brothers all lined up on a wall with his father at the end, as well as other family members.

“There’s about 10 of us in here,” he said. “I think my dad may be one of the oldest in here. Where else can you go to see veterans? You can’t go nowhere to see them. I come here every chance I get, and it brings back memories.”

With all of the history stored inside the museum, Johnson, who served in the Air Force for 30 years, said one of the most interesting items on display would have to be the helmet he donated.

“Several times you’ll have a visitor to the museum put that helmet on for a little photo op because it has different visors,” he said. “I think that is one of the favorites of people in here.”

In the final moment of questioning, Johnson was asked how he would feel if the museum disappeared.

The Daily Herald will continue to follow up with more Herald Angel articles in regard to the Roanoke Valley Veteran’s Museum’s unfolding situation.

Please donate to the Herald Angel Fund by bringing a check or cash to The Daily Herald office, 1025 Roanoke Ave. in Roanoke Rapids. The office is closed to the public because of the pandemic, so donations can be dropped into the mailbox. People may also mail a check to The Daily Herald, 1025 Roanoke Ave., Roanoke Rapids, NC 27870, with Herald Angel Fund in the memo line. Every contribution goes directly to the Herald Angel. Donors who give more than $5 have their generosity honored with their names printed in The Daily Herald. Donations may also be given anonymously.